Andrew LambLeader
Owner
Posted 8 days ago
To set the tone...

I left for the three-month sponsored walk across Scotland’s highest mountains in late January and was at Ben Alder by Mid March. Ben Alder is a magnificent mountain, a large lump with a vast summit plateau, remote from road and rail. The day was white – snow covering the ground and snow in the air. Visibility was reasonable, on and off. I could see the storm’s approaching waves. There was a period of relative calm then it would crash into me, a vicious wind carrying with it hail and snow and cold, hitting me and stopping me in my tracks until it had passed. Then I had a few minutes of walking before the next wave, and head down again to shelter my face, and to wait. Finally I gained the top and it was time to think of an exit, a way down to safety. I could head for Culra Bothy or to Ben Alder Cottage, both bothies maintained by the Mountain Bothies Association. A quick look at the map and I decided on Ben Alder Cottage as this would place me well for the morning and the next day’s hill walking.
I descended south and made my way out of the storm. Now there was deep snow, a joy to slide through on the way down a hill. Eventually the shoreline of Loch Ericht came into view along with the pine trees growing along its banks. It wasn’t difficult to locate the cottage and I was just in time – darkness had fallen. Once inside I lit a small fire, not for heat, but for the comforting glow. I placed candles on any available flat surfaces; window-sills, the floor, the mantle above the paltry flames of the hearth. And I explored, two rooms joined by a door and out back another room, only accessible from the outside of the building, perhaps a store of some kind. And I cooked and made tea.
With the fire dying and the candles needing to be preserved, I opted for the usual, an early night. I laid out my sleeping bag on the floor near to the fire, near to the door of the building, and lay there, listening to the wind, happy to be away from the elements and wrapped in the warm down of many ducks. I heard footsteps outside. Good. People to talk to tonight, I thought. I heard the feet wander up to the front door, but the door didn’t open. I heard the feet crunch over the frozen snow to the rear of the building. I felt sure I heard the door to the store room open. I was alone in a remote area of the highlands but was, by now, used to this, used to long dark nights and early starts, used to sounds carried by the wind, used to hearing rock-falls and animals of various sizes moving about at night in their search for food.
But this time, these footsteps, I was afraid. I became very afraid. There was nothing I could do. In the Highlands, in the winter, there is no-one to hear you scream. I buried my head in my sleeping bag and hid from the danger. I must have spent a good half an hour warm but shivering before slowly inching my face out of the bag and taking a look around me. All was as it had been. No more footsteps, no doors opening or closing. A couple of candles provided a warm glow. But the fear was still with me. I wrote in my diary, to take my mind away from the bothy and back to the brightness of the day on Ben Alder. An hour or so later another party of walkers joined me, tired from a difficult walk in, from being lost in the storm. They said “Hi,” and made camp in the other room. At least I was now safe.
A couple of years later I was chatting to some mountaineers and we got to discussing Scotland and bothies. I mentioned that Ben Alder was one of my favorite spots and that the bothy at its foot was charming although I had spent a rather worrying night there. One of the men said that he would not stay at Ben Alder Cottage alone and knew none that would. It had a fearsome reputation, being haunted by the ghost of a ghillie, a deer stalker, who had been found hanging, hanging in the store-room at the back of the building from a rope tied about the rafters. 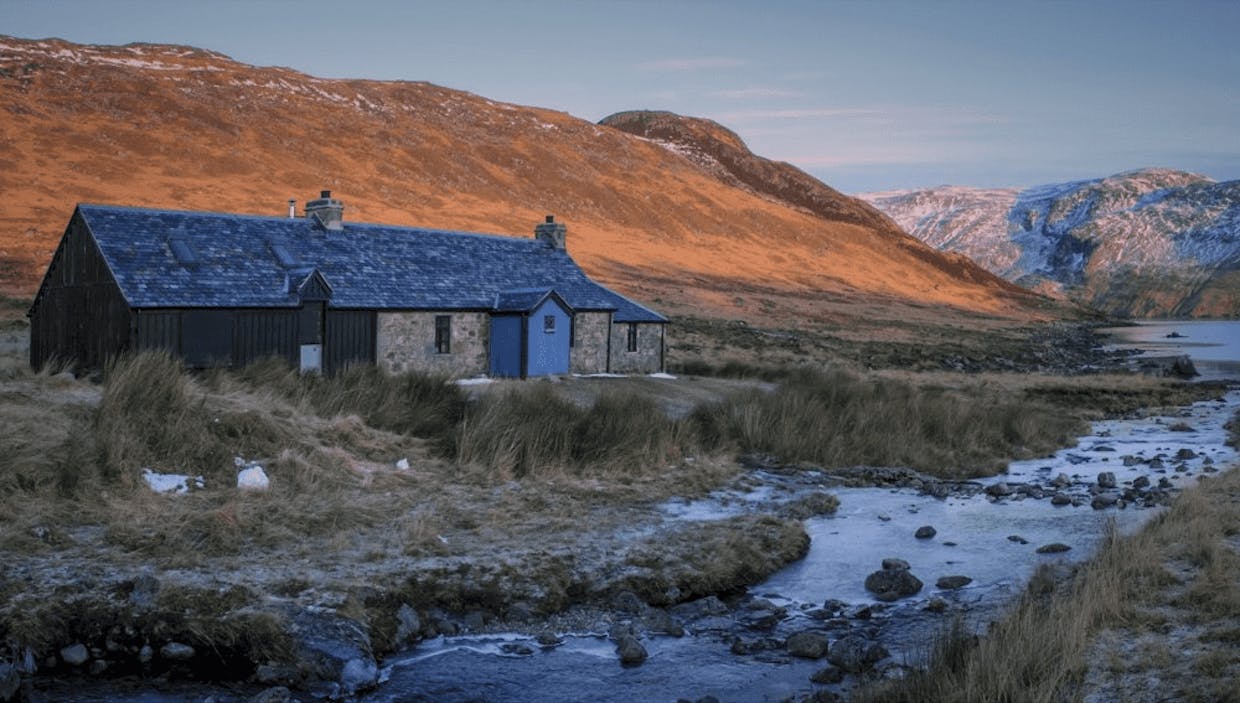 Liked by David Andrew Good... and 4 others